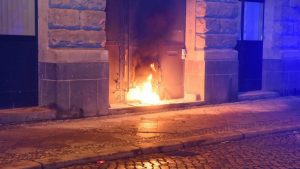 A Christmas present for the cops

In remembrance of Alexis who was murdered by the cops in Athens 8 years ago we have visited the friends of his murderers in the immediate vicinity of the Alexanderplatz and left 10 liters of petrol as a gift at the entrance door.
The solidarity of this action also applies to our prisoners who are sitting in jail because of the bank expropriation and are waiting to be sentenced by the executioners.
More solidarity greetings to Tuna, Balu, Cem and Ali.

We have noted with joy that in Leipzig last night some other people decided to attack the state and it’s lackeys.

Government institutions! See you in Hamburg!