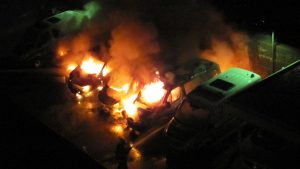 In the summer, it left us speechless, yes indeed, we could barely exhale. For the longest time, this question had concerned us: Who was the idiot who decided to hold a summit of the world’s largest industrial states at the Hamburg Messe Hall in the heart of the left alternative district? In December the ‘mystery’ was solved. Olaf Scholz had personally promised the Chancellor. The reasoning is obvious: Hamburg, gateway to the world, must be able to withstand such a summit. Following the bungled Olympic bid, now its time for the summit.

What Hamburg will endure, we will know in about three months. (Summit history: Genoa, Prague, Seatlle, Gothenburg, Heiligendamm…) We didn’t want to wait until the hot days before the summit. For this reason on the 26th of March we attacked the police station on the Grundstrasse in Hamburg in the early hours of the morning and set the vans in the yard on fire.

Our target was selected with care, the repressive machinery has been working at full speed on the criminalization of the resistance. For those who wish to express their dissent against the summit, the prisons are already prepared: UHA on Holstenglacis and the Billwerder Justice Center will provide room for the prisoners. In Harburg on the Schlachthofstrasse, a former grocery market will be converted into a prisoner collection point with a judicial branch office and also in Hahnoefersand 100 spaces will be provided to bring protesters in from the street.

We are regularly made aware of what it means to live under a state of siege. Like the times when ‘danger zones’ are established to take the quarter back under the control of the existing order, or the times when street festivals are attacked in order to show who has the final say here. And finally the time on the Hafenstrasse when the whole street was put under suspicion, racist identity controls were organized and the street was put under 24 hour surveillance.

But what is going to happen here in Hamburg in three month’s time will probably make everything else pale in comparison. Already in December, a major part of the machinery of repression was put into action. One week before the start of the OSCE summit, the siege situation prevailed not just at the Messe Hall but throughout the entire district. The impression was given that any protest or resistance could be nipped in the bud by well-equipped police units. Checkpoints were erected, water jetties were set up, helicopters circled day and night. The press gushed with superlatives and images of the well prepared SEK (Special Deployment Commando) officers.

This onslaught is due to the tactics of insurrection and is now embedded in the security architecture of Europe. The powerful are preparing for a future of internal-European conflicts. Internal exploitation and the resulting uprisings, such as in Greece, or more recently, in France are increasingly becoming part of everyday life. And it is precisely against this that the apparatus is armed: to nip these rebellions in the bud, and to be able to overpower them with immediate repression. A scenario of fear is used as a justification to the people of this capitalistic society for the daily internal rearmament. This is a scenario that a large sector of the population have automatically accepted in recent years.
The debates regarding the extension of video surveillance and data storage are not just to promise more ‘security’ but to promote the feeling that control is omnipresent.

Special units such as the SFOE, the MEK and the SEK serve as a means of intimidation by force. Supported by high-tech equipment, they are the bulwark for the interests of power and the exploitative structures of this capitalist society.
A society that cannot exist without insulating itself. A society that has upgraded its external EU borders and built up its specially created border agency, Frontex. It is becoming increasingly difficult for people to reach Europe and many more people will drown in the Mediterranean attempting to flee here.

We attacked the police because they are the part of this insidious machinery that are directly implementing violence. They are the glue that holds everything together. Everyone from the lowest ranking patrol officers right up to the highest ranking cops fulfil a function. If we want to talk about destroying the system we will have to deal with them directly. It is precisely these forces that will position themselves in our way when we gather in the summer to storm the exhibition halls and their infrastructure. We must recognize them for what they are, real and not just symbolic protectors of the ruling order, and attack them with full force. Anyone who defends the ruling order is also responsible for the exploitation of the global capitalist system and must therefore face the consequences.

It is always true: The oppressed of this world hate the police.

Greetings of solidarity to the Hafenstrasse: Don’t let the cops intimidate you! 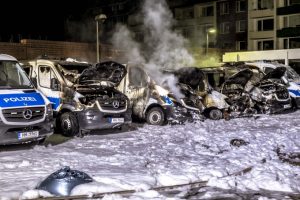