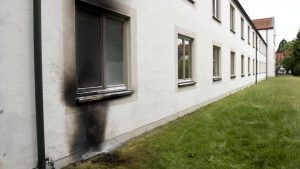 During the night of 05.06.17 to 06.06.17 we attacked the cops with fire and make the following statement:
This is an anti-terrorist attack, an attack against the terror of the bourgeois state, its institutions and the general logic of exploitation that is managed by it. In concrete terms, an attack against the terror of the cops and their institutions of class injustice. We used six litres of gasoline, but unfortunately it was not enough to burn down their headquarters.

The terror of the bourgeois (vulgus: “democratic-freedom”) state has many facets; Some people get it in the form of weapons exports to fascists like Erdogan or Frontex ships in the Mediterranean, others feel it a little more subtly in the form of police cops or their case worker at the job center where the state is the guarantor of a hostile human enemy.

The current property laws, which are based on the logic of profit maximization, not the needs of people, are the basis for the violence that is directed against us all.

In particular however, those who lose in this competition are the ones who are displaced by gentrification to the outskirts of the cities, who have to deal with precarious, underpaid shit jobs, or who are screened and deported from the outset because of their origin or lack of usability.

An essential component of the state apparatus which guarantees the existing conditions are the police. In addition to the employment and housing market, courts and JVAs (prisons), the cops represent a central location of capitalist capital. They are institutions that are not subordinate to the property laws, that oppose, persecute, isolate and block using the state’s interpretative authority. The cops are an instrument of power against all the exploited who do not conform to the constant threat.

The cops of the Federal Public are a direct tool of this policy. Here, forced evictions are carried out, fines are issued and antifascists are persecuted.

For these reasons we see it as a necessity to actively oppose repression by means of sabotage.

We support the calls to make the violence and devastation caused by the G20 states visible in Hamburg this July.

Another world is possible!
Fire to class injustice!
Freedom for Pola Roupa, Konstantina Athanasopoulou, Joel Almgren and all imprisoned comrades!