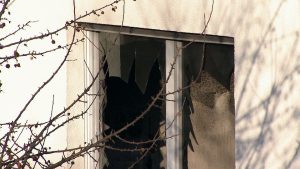 Only a few minutes of the year had passed when persons unknown in what was obviously a targeted attack threw fire accelerators at eleven different places into the building. At 00:22AM on New Year’s Day the fire alarm went off at the job center on Georg-Schumann-Straße. The rescue workers had some trouble but eventually managed to get the flames under control.
The damage after the fire at the Leipzig Job Center was immense: five offices, a warehouse and a social room at the center were severely damaged, affected are office supplies, chairs, files and computers. The building areas had to be blocked. A total of 20 rooms cannot be used because the corridors are inaccesible. The damage costs are comparitively high, but must be quantified by experts.

The Job Center is an attack on the social security system of the people in the city of Leipzig. In Leipzig the job center seems to be particularly keen on imposing sanctions. According to a recent study by the Bremen Institute for Labor Market Research and Youth Services, the sanction rate increased by a whopping 23 percent compared to the previous year, despite the fact that unemployment has fallen statistically. This means that the employment authority in Saxony is on its way to becoming the ‘Sanctioning Master of Germany’. Although numerous studies, including from the BA-side, have found that the sanction regime does not bring more people in the long term in pay and bread. It is harassment and stokes fear, and all this is an affront to human dignity. The reduction of benefits for profit should be stopped. The state and its representative bodies give themselves the ‘right’ to determine what is right and wrong, what action should be punished and for how long and how severely. This ‘right’ is enforced by force. We think it is good when people act on what they think is right without infringing on the freedom of other people even if the right of the civil state is broken. We welcome people who are not only affected by state representation who not only endure it but fight against it.

Almost daily we hear and read about people who fight against Hartz IV*. New social groups and campaigns against sanctions are emerging. However, resistance is becoming increasingly militant. Autonomists regularly attack the facades and windowpanes of job centers and agencies with paint, stones and fire. Others on the other hand attack job center and job agency clerks or run amok inside the centers and agencies out of despair. We understand their protest against this inhumane system and stand firmly alongside the rebels who are affected by it.

Against Hartz IV!
We do not want any other, better life according to the present rules of play! We want another better life!
People who are harassing people have to expect it to explode.
This will also apply to the G20 summit in Hamburg 2017!

*Translation note: Hartz IV refers to destructive attacks against Germany’s social welfare provision that were introduced as ‘reforms’ by the Social Democratic-Green Party government in 2005.