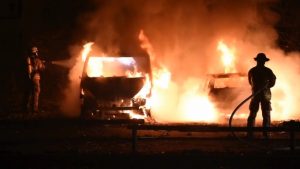 It is getting warmer, concerning the preparations for a hot July against the G20-Summit. In the night from 11th to 12th November property of the Thales Company was destroyed.

Thales is one of the eleven biggest armaments companys with an annual sales of 14 billion Euros and above this part of some technology programms, like the satelite range Galileo:

Initally conceived only for civil use, like smartphones, navigation systems, etc. decided the European Parliament in July 2008, that this technic should be available to the European Security- and Defense Politics (ESVP). Thales developed the project „Watchkeeper“, too. On commission for the British Forces an unmaned drone (Thales Watchkeeper WK450) was produced. They got ready in 2012 and flew until 2014 some 140 times over Afghanistan and were consistently upgraded in 2016. Since this year it is possible to load the drone with a 2-kg-warhead and laser- and GPS-control. At last the technology from Thales can kill directly.

END_OF_DOCUMENT_TOKEN_TO_BE_REPLACED

Eight month before the G20 – Summit in Hamburg, clandestine connections carry out their attacks against the current order in whole Europe every night. Mostly without knowing each other, our fires find similar targets in the hotspots of anarchist subversion, which are placed over the state-owned construct of the European Fortress. Often in a local frame of reference and too rare with the perspective of an international sabotage against the instruments of dominion.

So is the net of people, aggressive and poised to attack, allways on the search for opportunitys to direct the attacks to a common focus. We should have more courage to arrange to meet us, to travel in order to find places were we get in exchange of ideas and multiply our related experiences. But we want to conduct actions as well in the places where we live, which build relations above the local and specific context, which ignore temporary borders and get incalculable with it. END_OF_DOCUMENT_TOKEN_TO_BE_REPLACED 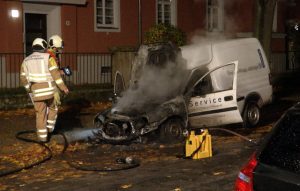 Dresden: War starts here!
As reported by the gossip press on Thursday a ‘service car’ in Dresden was torched. That was us!

Unfortunately the article and the police report did not reveal what kind of car it was, so we see ourselves forced to enlighten. It was not a ‘normal’ vehicle that we burned, but a car belonging to ThyssenKrupp (an armaments industry company).

Against the profiteers of war and Germany!
In July to Hamburg, attack G20!

This is the beginning of our week. And every day should start like this for those profiteers responsible for the prison system…

This morning, August 15th, we visited Television Service Jürgen Krüger and the SPD office of Björn Eggert in Oranienstraße in Kreuzberg and smashed their windows.

Television Service Krüger since thirty years holds the monopoly on examination of electronic sets from prisoners in Berlin. No radio passes him without being checked. This shall prevent forbidden goods or manipulated sets passing behind the walls. For prisoners this service costs a lot of money.
END_OF_DOCUMENT_TOKEN_TO_BE_REPLACED